Apologies if that last post sounded a bit bleak. Southendcockneyboy has just cheered me up immensely with this piercing bit of what the BBC is calling “debate”:

Get in there! United, United!

Seasoned commentators including Christopher Hitchens, George Monbiot and all those smart-arses with their blogs have so far been unforthcoming with a counterpoint, so compelling is Southendcockneyboy’s argument.

Nothing cheers me up like a good bit of debate. 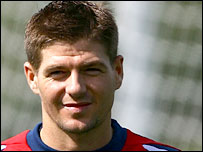 “We need to score some goals, ideally more goals than we let the other team score,” said Gerrard to gasps from the attending media. “We need to do this by using the things at the end of our legs to bash that round thing towards the net with a big Russian standing in it, and then past the big Russian.”

The Liverpool star went on to explain how a game is made up of two parts, known as “halves”, and that a win against Russia would be “a win”.

“The lads have been learning really really hard how to play football,” he said, “and now I think we all realise that the aim is to win the game rather than to let the other team win it.”

Winning Is On The Whole Preferable To Not Winning: The Wisdom Of Steven Gerrard is available from Penguin, priced £8.99. 10 Australians we COULD beat at cricket:

I know there are supposed to be 11 but we have to retain some kind of advantage.

I’m being ironic, of course. We could field the Chelsea Pensioners and still see this lot off in time for supper. But the underlying point is a serious one: that the Australian is not a mythical beast. It is a creature of flesh and blood and it can be beaten (or failing that, made to look ridiculous in drag).

Heard this morning on the radio:

What’s red and white and goes beep beep beep?
The England open-top bus reversing back into the garage.

This is my final word on the whole sordid topic. I never really liked football anyway. How’s Henman doing in the cricket?

As predictably as night follows day, our friends north of the border have got their knickers all in a twist again about England going to the World Cup while they get to stay at home and mope.

“Aye, the English, they’re so arrogant,” said one chap on Five Live last week. Another one said something else but how am I meant to understand them with those silly accents? They don’t even make an effort.

Meanwhile, sales of mangoes were reported to be up four-fold in Scotland in advance of the England v Trinidad & Tobago match, on account of the number of Carribean-themed party nights that were planned. It actually made me feel a bit sorry for them, having to find other under-achievers to root for when their own under-achievers under-achieve so splendidly they fall right out the bottom of the barrel. Simon Hoggart put it rather succinctly in yesterday’s Guardian:

I feel quite sorry for those Scots who detest England so much. There can be nothing more galling than to loathe someone who in return regards you with benign tolerance. Inevitably the anti-English brigade become like children shouting “I hate you, I hate you!” while the parent smiles and says, “I think he’s over-tired”.

Don’t get me wrong, mind: many of my best friends are English.

UPDATE: I take it all back, they’re right behind us.

That’s right, blogrot is commemorating the World Cup by offering you the unique opportunity to win a Signed England Shirt!!

The shirt (pictured) is one of mine from Tesco (in England) and bears not one but two signatures (Johannes Brahms, and Agnetha Faltskog from Abba).

To claim your chance to win this unique memento of Summer ’06, simply e-mail your name, address, credit card numbers, National Insurance number and approximate times you are out of the house to blogrot@englandshirt.com.

Regular readers (ha!) will be aware that I’ve been suffering from a nasty bout of conjuntivitis lately. Understandably, many of you may have been concerned about this affecting my ability during the World Soccer Cup when it “kicks off” later this week.

Well worry no more. Doctors in Manchester have today confirmed that my eyes are definitely back to “match fitness”, and should be capable of watching one or two “games” a day, no sweat. It’s a huge relief as nobody loves soccer more than me, and I look forward to cheering our boys on with both eyes when they “go out to bat” on Sunday.

Not recently, I hasten to add, although we did have potato croquettes last week. Does that count?

Either way I’m clearly not doing my job properly and must be driven from office immediately.

Photo: A croquet fan looking glum yesterday. Not only has the reputation of the beautiful game taken a “hammering” in recent days but it is also banned on trains in the UK, even first class. Not even a bacon butty and a female companion can cheer this fellow up, such is his love of “shooting hoops”.

It was silly season for nonsensical punditry this morning after the Arsenal’s defeat in some football match yesterday. I don’t pretend to be some kind of sports expert, but I do like to think I know bullshit when I smell it.

“Arsenal will come home knowing at least they’re a team who pass the ball,” said one eminent thinker asked whether there was any consolation in getting roundly thrashed.

“The ball went up in the air, and then it came down again,” said a third (or in football parlance, a second). “It went forwards and backwards too, and sort of sideways a bit, and at least three times it went in that net thingy.”

OK, the last one was me, just as the bastards at 5 Live hung up on me. But the rest were actual experts on football, not that you’d guess.

Continuing to put the mad into Ajmadinejad, the Iranian president has decided to let women attend football matches in order to promote chastity.

“The presence of women and families in public places promotes chastity,” he said.

See, I told you. Sadly they’ll be just too late to enjoy Grandstand, but he’s said it’s OK for them to watch re-runs.

Oh, and he wants to bomb everything too. Complete nut job.

The Guardian reports today that Vinnie Jones’s greyhound has failed a dope test. For once I find myself feeling unusually sympathetic towards the great actor. Back in the 1980s our cat developed a raging amphetamines habit and it cost us a fortune in vet’s bills. I suppose with greyhounds their competitive nature just takes over and before you know it they’re out all night at Rio Ferdinand’s and “forgetting” to attend their regular screening checks.

Poor little bugger. When he’s retired and it all turns to flab he’ll look bloody ridiculous. But I suppose right now that seems a long way off and his immediate concerns are for his greyhound.