…don’t you sometimes wish they had more imagination than a five-year-old?

“Are bloggers blogging themselves to death?” asks the Guardian.

I’m pretty sure I’m not. Youths ‘bored in school holidays’ reveals the BBC in yet another bit of piercing investigative journalism. However do they do it? They’re so down with the kids they must be scraping their faces on the pavement. The mind boggles at the ability of those 30-something men in ties to to connect with the adolescent zeitgeist.

It hasn’t always been this way, of course. In my day we had loads of stuff to occupy those long six weeks of the soul from July to August, including:

Bored? The word hadn’t been invented. A small boy, yesterday, shortly before he became bored and turned to terrorism.

OK, on the one hand – the Glasgow-airport’s-on-fire hand – everything looks really really bad. 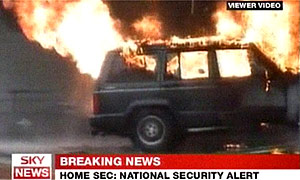 However, on the other hand – the glass-half-full hand, the we-shall-not-succumb-to-the-evildoers hand – England now has a smoking ban in all public places. So, you know, it’s not all bad, is it?

Plus, blogrot’s little smoking ciggy countdown doodah worked a treat, which is yet another bonus.

You see? It’s all in the way you look at it.

I am delighted to announce the opening of my new art gallery. Please feel free to visit: entry is free for Lego people.

A day of looking at Mrs Osbourne’s evil witchy face (or even just half of it) was too much for me yesterday. Something had to be done.

The girls were more interested in watching last night’s Strictly Come Dancing and were pretty resistant to coercion, but once I hinted that Father Christmas might get involved I soon got some cooperation.

OK, OK, so British Airways planes are all jam-packed with lethal Soviet Polonium-210 alpha particles, but it’s not like it’s all bad news, is it? I mean, at least the staff aren’t wearing religious jewellery.

Sometime you just have to take the rough with the smooth.

Photo: the red-eye to New York yesterday, so called because your eyes will go red and then fall out.

The world faces a terrifying and uncertain future today as the United States falls into the hands of pro-terror, anti-life lunatics. Wanton debauchery will surely follow. Listen to the podcast to hear leading Democrat Nancy Pelosi calling for a “nude erection” in Iraq. Meanwhile at a victory rally Democrats show al-Qaeda how America will be waging its “war on terror” from now on: gay men with water pistols. Thank God we still have David Cameron otherwise all might truly be lost.

I was full of hope yesterday for a bright new future for the cow people, but it seems it is not to be. The Daily Mail leader column was typical of the general mood, speaking of “driving these ghastly bovine chimeras to the sea where we will drown them like cats”. For me it’s the 99.9% human that’s important, but some people just can’t see past the 0.1% cow.

It seems that a true multicultural society remains, for the cow people at least, the stuff of political rhetoric and fanciful photographic trickery. A Face In The CrOWd by MykReeve.

I went to the Manchester Apple Store the other day for a quick prod of the wares. I was mucking about with a MacBook laptop when I was approached by some goon wearing an official Apple T-shirt and dangly badge.

“Need any help there, mate?” asked the goon.

I replied that I was just browsing.

“Ah,” he said, leaning in with the air of a man about to reveal to me a life-altering truth, “the inferior operating system!”

Honestly, what a dick. The crazy-eyed zealot went on to tell me that Microsoft Office is better on the Mac because it was written (by Microsoft) for the Mac first then ported (by Microsoft) to Microsoft Windows. Eventually I had to pull down his dangly badge and twang it up into his chin to escape.

I should know better. You wouldn’t walk into a Mormon temple without expecting to be told we’re all going to heaven in a magic spaceship. But must I really have to put up with this brainwashed pigshit every time I want to dribble over some overpriced technology? Where are my human rights in all this?

It is for this reason that Bill Gates will always win. Just like Blair, who needs an argument when the opposition are all maniacs?

Photo: a man hurries past the den of crazies clutching a talismanic John Lewis bag. By me.

Past colleagues at Teleca UK will no doubt be as moved as I was to discover that 634 Wilsmlow Road fell down this week. It was being converted into “luxury flats” when it was accidentally turned into a pile of rubble instead, trapping two workers in the basement for 45 minutes. (Big deal: I was trapped down there for three months!)

There are before and after photos on Flickr, as well as a BBC report.

It’s all a bit of a shame really. I have some quite fond memories of the place, including:

Photo: Pile of rubble by hugovk

Well what indeed?? Just one pertinent question raised in response to the maroon avocado.

Photo: A smile for the camera, please! by Reciprocity