Took me a while to realise he was talking about fishing. Honestly, they should teach them to speak properly before they let them on the radio. I’m having trouble sleeping now.

Celebrity arsehole Gordon Ramsay has not, it transpires, been burning his meatballs. The greens have not been overcooked in his meat and two veg. He remains a novice in the preparation of Grilled Cod Surprise. I know, posting another TV advert off YouTube is a no substitute for proper blogging, but what the heck, it’s got Mr T in it.

(There’s a YouTube video here that you may not see in a feed reader. If it’s not there, try the website instead.)

I was in half a mind to bring Tesco’s sorry arrangement of bananas to the attention of the authorities today. Greener than Kermit’s left bollock, the whole damn lot of them.

But then I stopped and thought: what right do I, an Englishman, have to demand yellow bananas in February?

I wish I had a wider point to make here about globalisation or the environmental impact of air freight, but I don’t really. I just thought it was interesting, the whole thing with the bananas.

I like to think we’re all big enough now to see advertising for the evil mind-bending witchcraft that it is.

On the other hand, this ad is very good and I urge you all to drink PG Tips tea as a result:

The wife just uttered those three little words which never fail to make my heart leap and remind me why I married her all those years ago: “Curry for tea?”

Truly I am blessed amongst men.

Do not, under any circumstance, eat a Mr Kipling Delightful Lemon Slice, for they are the work of the devil.

They are not delightful at all. And don’t be fooled by the slice of lemon depicted on the packaging. They have all the lemony goodness of a sponge scourer marinated in Fairy liquid.

Don’t be fooled as I was. Believe me, it’s better to just be fat.

Blogrot favourite NiceCupOfTeaAndASitDown continues to deliver on its public service remit with a penetrating round-up of mince pie offerings from the major UK retailers.

The attention to detail is, as ever, quite staggering:

The reflections in the silver foil put me in mind of Terminator 2. 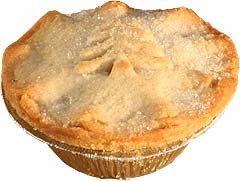 A Merry Christmas to both our readers!

Seen today on the BBC News:

Really puts things into perspective, doesn’t it? I mean, who wants to read about stolen sheet music when some Chinese lunatic has just spent the price of a new Jag on a fungus that looks like the Elephant Man’s head?

Get over yourselves, BBC.

Look what I saw at the petrol station tonight:

Clearly designed by a blogrot reader.

I bought one of course. When I think of all those unseasoned meals I’ve eaten during power cuts… that dreadful stroganoff from the total eclipse of ’98… but there’s no point in dwelling on these things.

Hey, see that story in the news about the jelly security alert in Germany? Yeah, that was me. I knew it would shit them up a bit. Far too serious about stuff like that, the Germans.

Keep your eye on the papers for my follow-up attacks: a hundredweight of blancmange at the Colosseum in Rome; sherry trifles appearing overnight outside Israeli embassies worldwide; packages containing Angel Delight powder mailed to Bush, Putin and Blair.

Make no mistake, this campaign will continue until my demands are met – probably something to do with a better selection of hundreds and thousands at Sainsburys.

I’m off to a stag do in Leeds this weekend. Below is a list of challenges set before the groom-to-be by his best man. I apologise if you find any of this offensive. I certainly do. In fact, I’m thinking of not going.

NB The suggestion of the groom walking into a bar holding a Cornish pasty above his head shouting “I’ve got a bomb!” failed to make the list on account of its likelihood of him getting arrested.

This one must have been around for years, but I always think of it when I’m eating pancakes.