I don’t trust that Palin woman. There’s something not quite right about her.

Suppose that’s
Checkmate to Death
Then.

A scene from Bergman’s iconic The Seventh Seal. I say iconic, but I could never get into it myself. Even with all those seals it was never a patch on Happy Feet.

I am delighted to announce the opening of my new art gallery. Please feel free to visit: entry is free for Lego people.

Initial reviews of new German Nazi comedy Mein Führer – Die wirklich wahrste Wahrheit über Adolf Hitler (My Führer – The Truly Truest Truth About Adolf Hitler) are surprisingly poor. You’d have thought a comedy about Hitler made by Germans would be a hoot, but according to Damien McGuinness on Radio 4’s Front Row, the laughs mostly revolve around the Nazis being fat and falling over a lot.

Here’s the trailer so you can make up your own mind:

It’s a shame. Some of my favourite comedies are from Germany, such as Stop! Oder Meine Mami Schiesst.

Some of my greatest pleasure in life comes from the 1- and 2-star reviews of the Guardian film critic, Peter Bradshaw. The man’s inventiveness in the field of destructive criticism appears to know no bounds. I am therefore delighted to present the Blogrot Worst of 2006 Film Quiz. The object is quite simple: match the exquisite put down to the film at which it was aimed. There’s one 3-starrer in there too for good luck. All excerpts are taken from Peter Bradshaw’s reviews of 2006.

There are no prizes, obviously. It’s the taking part that counts. For answers see the first comment.

Genius movie director Guy Ritchie discusses his complex masterpiece Snatch on YouTube, giving us all a rare insight into his high-IQ world:

Irish crooner Chris de Burgh has paid 30 grand for the chest-burster from Alien. (Chris is the one at the top.)

He also has a £14,000 letter from WWI, special healing hands and Miss World for a daughter. I’m telling you, this guy puts the RRROCK! back into rock star.

Rumour has it that Chris has written a special version of his hit song Lady In Red for his little alien, entitled Lady in John Hurt:

The Lady in John Hurt is hatching in me, little freak
There’s nobody here
It’s just you and me, and-some-blokes-and-Sigourney (Weaver)
But I hardly know this beauty in my insides
I’ll never forget the way you made my chest burst open and all my blood squirt out

I didn’t say it was finished yet but it’ll be done for Christmas.

I ate his liver with some Alphabetti Spaghetti and a Fruit Shoot.

It just doesn’t have the same ring to it, does it? I told the scientists these miniature livers would never take off, but as usual they didn’t listen.

New information: I stand corrected. Apparently Brewster’s have put in a bulk order for their new range of stem-cell burgers with curly fries. Never let it be said I don’t admit when I’m wrong.

Went to see The Departed last night. Don’t get me wrong, it was very good, but it did get me thinking: couldn’t they get Ray Winstone to play all the cockneys Don Cheadle‘s supposed to play, and get Don Cheadle to play the Americans Ray Winstone’s supposed to play? It would solve a lot of credibility issues, not to mention saving a fortune in wasted voice coach sessions.

Update: It’s just been suggested to me that Winstone is in fact play a Boston Irish hoodlum who has had a stroke which has left him with a partially Cockney accent. In that case I would like to commend his excellent performance and shift my criticism to Scorcese for losing this crucial back story detail in the editing suite.

Lord help us: Tolkein’s putting a new book out. Apparently he was still alive when he wrote the other stuff but I’m pretty certain his death won’t have upset his delicate balance of page-turning pace and witty characterisations.

It goes without saying that the book is very long and about hobbits.

Peter Jackson is en route to New Zealand as we speak to get enough material for another 15-hour epic “in the can” before he dies of old age. His filming schedule is thought to look something like this:

I can barely contain my excitement.

Back away, Spielberg. Hang up your spurs, Scorsese. Go back to the day job, Meyer. For there is a new kid on the block, and his powers are awesome.

And from the DVD extras, here’s a behind-the-scenes shot from the set:

I just saw this in today’s TV listings:

Comedy-drama about a ten-year-old boy with an ageing disease which makes him appear to be 40.

I don’t know how this one passed me by on its release in 1996 but it did. Honestly, can you even begin to imagine a more troubling concept? It’s a comedy… about an ageing disease! But no, wait… with Robin Williams! And, and… and Jennifer Lopez! And Bill Cosby!! I mean, where do you start?? What was Coppola thinking?? 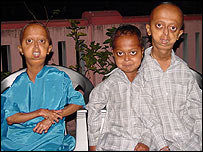 Not surprisingly, it gets a 19% Rotten Tomatoes rating.

For the record, people with real ageing diseases tend to look pretty odd, and not in the Robin Williams way. They do have weird heads and funny arms. They don’t have all-over body hair and a chin like Sarah Jessica Parker.

Still, don’t get me wrong, I’m sure it was a laugh riot all the same.

I’m getting so bored of the other one.

I got Revenge of the Sith for Christmas. Did you?

Is it just me, or is everything Sith?